TBISA (Too Bad It's Sunday Already)

You know it's funny. I complain about being stuck on the computer all week at work and what do I spend half my weekend doing? That's right, futsing around on the computer. But at least I can do what I want when I'm home, instead of data entry. I did spend a couple of hours trying to troubleshoot a problem I was having installing Norton Antivirus Software. But after much research and help from my dad, I got it installed successfully.

Qué más? I got a much needed massage on Saturday from a student at the Phoenix School of Theraputic Massage. It's great...prices are discounted because they are students, but they still do just as good a job as any other massage place. My back is feeling better already. Speaking of my back. I have had back problems for several years now and have seen various back specialists in all the places I have lived, and none have been able to give me a reason why my back constantly hurts, much less give me a way to fix it. So I had stopped going for about a year or so, and in that time we moved to Flagstaff. It is really starting to give me trouble again so I decided to bite the bullet and see yet another doc for treatment. My first appt is in 2 weeks, so we will see how it goes. Check back for an update.

Well, since I didn't have much to say today, I thought I would tell you a little bit about the town we live in, Flagstaff, Arizona, and take a first try at posting some pictures with this post.

Flagstaff, Arizona, is a small mountain town of about 60,000 people. It is located in northern Arizona and is about 60 miles south of the Grand Canyon....yes, THE Grand Canyon. So that gives us lots to do when we have visitors. The city is situated on the south side of the San Francisco Peaks, Humpreys Peak being the highest point in the state. When most people think of Arizona they think of the dry, empty desert and most of the state is just that. However, Flagstaff is at about 7,000 feet (2100 meters) above sea level, so are climate is rather different from other parts of the state. In the summer the average temperature is about 80 degrees F (26 degrees C) and in the winter the average temperature is about 35 degrees F (2 degrees C). We have snow frequently in the winter, which is great for the Arizona Snowbowl, 1 of only 2 ski resorts in the state, which is just NW of Flagstaff.

Flagstaff has about 120 years of history, established in roughly 1870 as a logging and lumber town. Since then its economy has changed to rely principly on Tourism and manufacturing. The historic downtown area has been preserved and restored and is still used today by tourists and locals for shopping and dining. Now for some pictures I've taken around town: 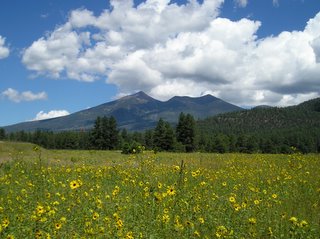 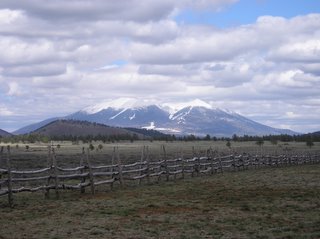 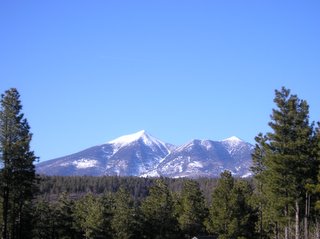 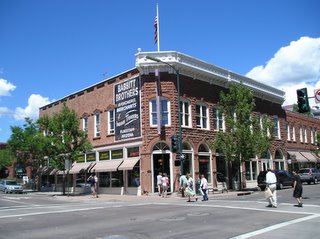 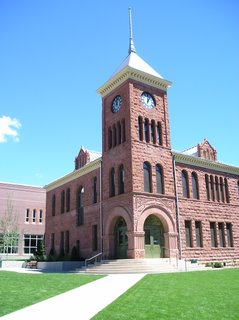 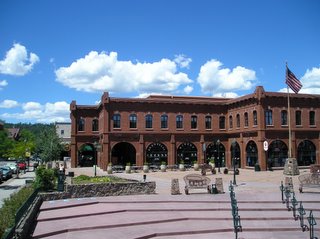 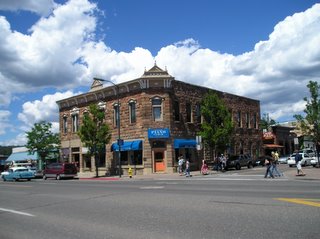 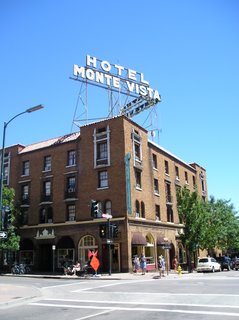 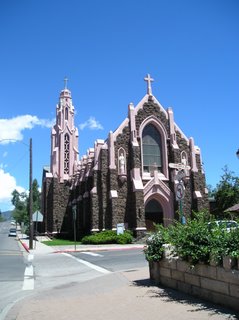 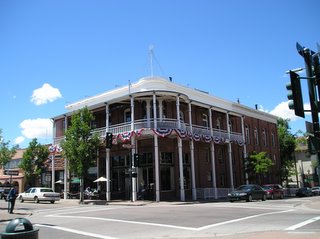 Well, that's Flagstaff in a nutshell. It's a great little town and so far we have loved living here. That's all for now.