Option 1 - If you pick this option you are garanteed assigment to a site in the Phoenix metro area. Within this area there are roughly 20 different sites/hospitals. Which site you are assigned to is random, which I will get to in a second.

Option 2 - If you pick this option (which I did) you will be assigned to a site somewhere else in Arizona besides the Phoenix Metro area (excluding.Tucson). So this includes Flagstaff (awesome), Cottonwood (next closest, 1 hour from Flag) Prescott, Kingman, Payson, Bullhead City, Show Low or Yuma.

Here's a map of Arizona with the site in Option 2 circled: 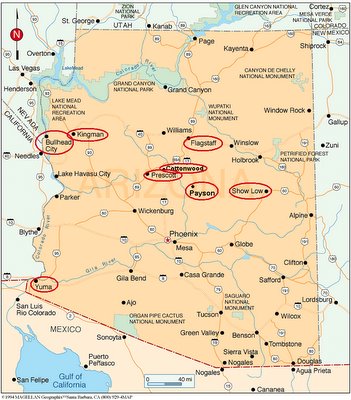 I had a lot to consider when I was choosing. If I chose Option 1, I knew I wouldn't be placed any farther from Flagstaff than 2 or 2.5 hours and I would be able to stay living wherever it was I was living in Phoenix, but I also knew that there was no way I would have a chance to be placed at the Flagstaff hospital.

And if I chose Option 2 I could potentially be placed at the Flagstaff hospital during one of my rotations, meaning I could live at home with Becky and also make connections for potential future employment. But it also meant I could possibly be placed in Yuma, a good 5-6 hour drive from Flagstaff.

So, after much thought and advise from friends and family, I decided I would take a gamble and choose Option 2, sites outside of Phoenix. Time will tell if the gamble will pay off or not.

I am very concerned about this part of the program, as it will dictate not only how much driving I will have to be doing in the next 2 years, but also how much time I get to spend, or not spend, with Becky. I have my fingers, toes and anything else that will, crossed that they pull my name first, or at least that no one picks Flag until they pull my name. Wish me luck.
Posted by Dustin at 3:18 PM

Wishing you a huge Thanksgiving helping of LUCK !!!!!