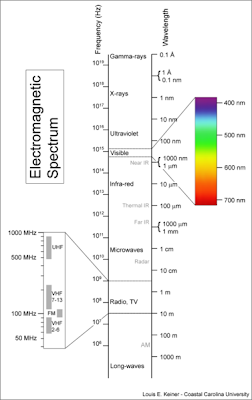 Recently, a reader left a comment on my blog asking how visible light is similar to x-ray radiation. And being the big nerdy, bookworm geek I am, I got right to researching it. His or her question was a good one and got to the very basics of Radiation Physics. Most of my classmates hated the Radiation Physics class we took first semester, but I loved it and found that I was actually quite good at understanding it. So hopefully I’ll be able to answer this readers question here, so that everyone can understand.

Visible light and x-ray radiation are similar in that they are both composed of photons traveling in waves, but differ in the frequency and energy of the waves. The electromagnetic spectrum is made up of several different types of radiation. From highest energy to lowest energy they are: Gamma rays, x-rays, ultraviolet light, visible light, infrared light, microwaves and radio waves. The first three are what are called ionizing radiation. That is, the waves are so energetic that they can actually interact with and possibly destroy or alter DNA molecules in cells. This can result in the destruction of the cell, the organ or the creation of mutant forms of the DNA we call cancer. Hence, if you receive too many sunburns (caused by ultraviolet light from the sun), you may eventually get skin cancer. However, visible light, infrared light, microwaves and radio waves have such low energy that the waves are unable to interact with DNA and therefore have no effect on cell reproduction.

So in summary, all these types of radiation (x-ray, visible light, radio wave, etc.) are, in their basic form, the same thing. They are “packets” of photons that travel in waves. However, what makes them different is the frequency and wavelength of those waves (which is in itself a function of the amount of energy in the wave).

Having gone back and read the previous two paragraphs, I realized that I made x-rays seem like pretty scary and damaging things. In reality they are not. Not only does modern x-ray equipment use relatively little radiation to obtain a radiograph, but also, believe it or not, your body is mostly made up of open space, which the x-rays pass right through. Your body is also composed of lots of water and minerals (e.g. calcium) which are unaffected by x-ray radiation. While it’s obvious you don’t want to be exposed unnecessarily to x-rays, almost always the benefits outweigh the risks when getting an x-ray image.

I hope this answered the reader’s question and has helped you get a basic understanding of x-ray radiation, at least in its relationship to visible light and other radiation types on the Electromagnetic spectrum.

Since I was born in Canada, I have sort of a soft spot for my brethren to the north. So when I found this video on YouTube.com I had to post it here.

I can really relate to all the stereotypes about Canadians that are mentioned in this Molson Beer commercial, because when I first moved to the US I got a lot of the same comments.

Anyway, if you are familiar with Canada or Canadians, this commercial will make you laugh.

Yuck! I'm in surgery all this week. Not my favorite place to be. Although watching some of the surgeries like lap choles and IM roddings, I really prefer doing general x-ray exams or fluoro. As an X-ray Tech in surgery, you seem so removed and disconnected from the patient. For me, it also seems to be made up of long periods of boredom, broken up by short bouts of extreme nervousness and awkwardness on my part.

I'm not that great with the C-arm. I'll just admit it. And I think my CI knows that, so he keeps putting me in surgery every other week. I guess its good.....in a way. It forces me to get to know the C-arm and the quirks of each doc, and will ultimately make me a better tech, but man, do I hate being down there.

Firstly, I am stressed out the entire time, just waiting for the doc to get pissed cuz I did something wrong or I'm not doing something fast enough (e.g. I actually had the doc grab the head of the C-arm today and shove it out of the way, almost taking out a table to sterile instruments in the process! Jeez, ever hear of something called patience! I'm new here buddy!!).

Secondly, as you have all heard me complain about before, I've had chronic back pain for more than 7 years now, and wearing those lead aprons all day really takes a toll on the old "espalda".

Thirdly, F$%# it's cold in there. Why do they keep it so cold!!??.......Well, I know why....to keep down infection and all that good stuff, plus I think the docs get pretty hot in their sterile gowns. But could they bump the thermostat up a degree or two, so I don't turn in to a block of ice in blue scrubs?

Anyway, sorry for using this posting to complain so much. But it's my right, as a student, to complain, especially since we don't get a paycheck at the end of the week!! :-)
Posted by Dustin at 5:03 PM 3 comments:

Having pathology class is pretty freaky. If you're not careful you could really become a major hypochondriac with all the information you learn in that class. Considering that our pathology book is just shy of 500 pages long, contains only pathologies that can be seen radiographically AND doesn't discuss some of the more rare conditions, it's enough to keep you up at night worrying about whether or not you have pleural effusion, renal vein thrombosis or a host of other weird pathologies.

The only thing you can do is, when you're not in class or studying, push that info into the back of your mind otherwise you'll never be able to get thru the day.
Posted by Dustin at 12:19 PM 1 comment: