How It Works - X-ray Machines

Almost everyone has heard of x-rays before. Some people have even had images made using x-rays, but most people don’t understand how x-rays work and how they are produced.

This is the first of a series of posts called “How It Works” in which I will attempt to explain how various imaging modalities work. This first post explains in layperson’s terms what exactly an x-ray is, how it is produced, and how it is used for medical imaging. I will do my best to keep it from being too dry, but lets face it, it may get a little technical at times, I mean we are dealing with physics here. So….

X-rays were first discovered by a German physicist named Wilhelm Roentgen (pronounced “RANK-in”) in 1895. While experimenting with electron beams, he found that when exposed to this electron beam a piece of phosphorescent paper would glow. This in itself was not ground breaking. However after experimenting by placing different types of material between the beam source and the paper, to determine the beams penetration ability, he found that the beam passed easily through most material. Finally, he passed his hand through the beam and discovered that it produced a “shadow” on the phosphorescent paper in which he could make out the bones of his hand. Within weeks other scientists were experimenting with the various possible uses for x-rays, most within the medical field. And the rest is history.

X-rays themselves are actually a form of radiation closely related to visible light, infrared and ultraviolet radiation. X-ray radiation is very similar to visible light but with a much higher energy level. This elevated energy level allows x-rays to easily penetrate less dense materials (such as clothing, plastic or skin) and pass through to the other side. However, materials of a more dense nature absorb some or all of the radiation hitting them. Therefore when objects composed of materials of varying densities (e.g. human bodies) are exposed to x-rays, the shadows produced mimic these density variations.

Although today’s digital imaging technology is quite advanced, the first x-ray images were produced with relatively simple equipment. The source of x-rays is the x-ray tube, which produces x-rays using a vacuum chamber and high amounts of electricity. The x-ray tube will be discussed later. Also needed are phosphorescent or fluorescent paper, unexposed film, a light-tight cassette to house the paper and film and of course a patient. The film and paper are placed in the cassette and then placed within the x-ray beams trajectory on the opposite side of the patient as the emitting tube.

When the x-rays are produced they pass through the patient and hit the phosphorescent paper causing it to fluoresce or glow, which in turn exposes the film below it. The film is then removed from the cassette in a dark room and developed just like film from a 35mm camera would be. The areas of the paper, which receive more x-ray radiation glow more brightly causing more of an exposure on the film directly under it. So variations in densities of materials through which the x-rays are passed show up as variations of light and dark gray on the film. 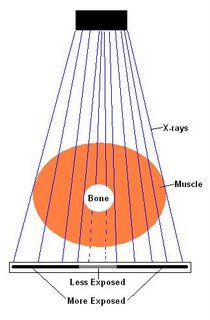 The process for producing the x-ray radiation, however, is much more complex. X-rays are produced in an x-ray tube, which is composed of an electrode pair (a cathode (positive) and an anode (negative)) and a vacuum tube. A large amount of electrical current is passed through the cathode heating it up to a very high temperature, which causes it to release electrons into the vacuum chamber. The anode, which is a negatively charged metal plate located several inches away from the cathode, attracts the electrons and causes them to hit the anode plate at a very high rate of speed. The collision causes the electrons to release photons, the basic particle of which most radiation is composed. The high energy photons manifest themselves in the form of x-ray radiation, which is then directed down and out of the machine. 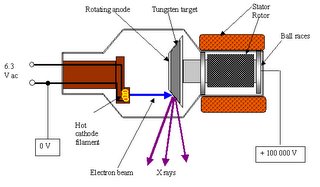 Since its discovery, x-ray radiation has been used for many different purposes, many of which are in the medical field. Diagnostic and interventional radiography, fluoroscopy and Computed Tomography (CT) are just a few modalities that use x-rays. After more than a century of research, we are now able to harness and use x-rays to diagnose many types of illness in a manner that is safe for not only the patient but also the healthcare workers employing them.

Because of my desire to NOT bore my readers to death, I have left out the nitty-gritty physics of the machine, but the above explanation should give you a general idea of how x-rays are produced and used in medical imaging. If you have any questions about this post please feel free to leave them in my comments section, and I will respond to them to the best of my ability.

thanks for the review. It joggled this docs brain and refreshed his memory of how xrays work.

You are welcome. I hope it helps my readers understand the mystery that is x-rays. :-D

I am interested in finding a school. What would you recomend? wdbird@cox.net

Your site is a God send! I just got accepted to the MRT program at Fanshawe College (Ontario) beginning this fall. This material will be great to review over summer so fall won't be so head spinning!

Thank you, I found your site very helpful as it helped me gain better understanding about x-rays and how they work
Thank you again

I start rad-tech school in the fall and finding your blog was a Hallelujah! moment. Thanks.
A.

Hi! Nice page. You have your polarities, reversed, though...The anode is positively charged, and the cathode is negatively charged.

Your page is a great public service to the community. My question is, In order to be an X-Ray Tech You must have the stomach to deal with shocking physical injuries on patients, right? Can one overcome such obstacle if not naturally prepared? Look forward to your answer.