A "Sticking Party", and everyone's invited 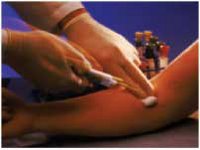 I was such a good boy today. During our lecture this morning, a woman from the Phlebotomy program came to our door and let us know that they were having, as she put it, a "Sticking Party" today and it would be great if anyone could come by and help them practice. So I decided that I would step up to the plate and volunteer.

However, we had two tests this morning, so I waited until after I was done with them to do it. I mean, I need all the blood I can get on a test day! So after my last test, I went over there and volunteered.

I was a little apprehensive at first when I met the girl who was going to do me. She had purple hair done up in pig tails, and looked to be about 16 years old. But I figured I would give her the benefit of the doubt since I also look much younger than I am and am sometimes not taken seriously because of it. Plus, they had been doing it all morning, so I knew I wasnt going to be her absolute first "patient".

I have had blood taken many times before, so I knew what to expect. Everything went pretty well overall, I would say. She took a little longer than normal, but I guess that is to be expected. They are learning after all. It also hurt more than it has in the past, but again there is a learning curve. I joked with her that since I was letting her poke me, she would have to reciprocate when our class has to practice venipuncture. She didnt seem too thrilled about that little payback idea. But oh well.

I am a little ashamed to say that I got a little woozy after it. I was fine until I got up from the chair and walked out into the hallway. They had set out some free food for the volunteers and as I stood their eating my muffin, I started to get really thirsty, I had a cold sweat and then my hearing started to become muffled. Have you ever experienced this? So I decided I better sit down for a minute, just in case. A class mate of mine came by and asked if I had volunteered, and before I could answer, he said "Yeah, you did. I can tell, you are all white. Are you OK?" I said yeah, I just need to sit for a second.

The site is a little sore now though. I think she may have done some digging to find the vein. However, I dont know for sure, since the last thing I wanted to do was watch her poke me! :-)
Posted by Dustin at 11:11 AM

That was really sweet of you! We should compare bruises- it's been a week since my experience, and I'm still black, blue and purple. LOL... stupid students! :)