We had our first real lab competency test in our Positioning class today. It was on the upper extremities. I studied and practiced for several days for this and it turned out to be much easier than I thought it would be. What I thought would happen is that when we went in with the instructor they would give us 3 different parts of the upper extremities (ex. digits, hand, wrist, forearm, elbow, humerus) and we would have to know which positions are needed for the part (ex Anteroposterio, Posteroanterior, lateral, oblique), but it turns out, it was only 2 parts AND only 1 position for each part. For example I was asked to demonstrate the position for a PA hand, which looks basically like this: 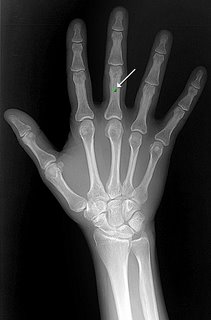 and also a lateral forearm, which looks like this:

EASY!! However, we also have to remember to complete some of the technical details of the procedure (e.g. including the anatomical markers, collimating properly, including proximal and distal sections to the part in question, using the gonad shield) as well as some of the patient care details like verify the "patient's" name and date of birth, greeting them, introducing yourself, explaining the procedure, asking if they are or could be pregnant, etc. However, most of that is kinda common sense stuff and will become second nature after enough repetition.

I got 100% on it, so apparently I remembered all the little details. Admittedly, the two positions I had to do were much easier than the ones my partner had to demonstrate on me. I felt bad for him. I know he knew the stuff but he just got nervous and had a little trouble. Luckily the instructor we had was really nice and didnt mark him down too much.

I definately think these competency tests will become easier as we get more practice. In two weeks we have another test in there and it looks like it will be for the upper arm, shoulder girdle and neck. Lots to learn in two weeks.

100%!!! Congrats!!!
Good luck learning the new stuff- don't you wish they gave you a few seconds to breathe between exams?!

I kind of wish we had positioning tests in the university. All they do here is give us the briefest of lectures on the subject, then let us out to *really* learn it on placement.