OK, maybe not the hardest test EVER, but pretty hard anyway. It was one of the most difficult tests so far in my radiography program. It was in Radiographic Techniques, and although I think I did pretty well, I left the classroom brain-fried.

It was one of those tests with questions like:

A lot of if-then statements.........YUCK!! There seem to be endless variables you can change when making an image of a patient, and we have to know what will happen to the image if one or more of those variables are changed. It's a lot to keep straight in your head without having any experience in making x-ray images to use as a reference.

Our instructors said it will come together during clinicals (we shall see!), but for now we essentially had to memorize a + and - chart which tells us how one variable is affected if another variable is increased or decreased. For example, if you increase the mAs (which stands for milliamperes per second) you are basically increasing the amount of radiation leaving the x-ray tube. This increase in radiation means that more radiation will penetrate the patient and pass through to the other side, which in turn exposes more of the x-ray film making it appear more dark or have a higher visual density (degree of blackness).

Here's the chart, in case you're curious. 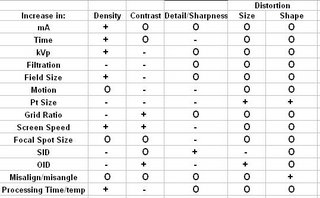 Hi, I'm planning on starting my diag radiography course next year, at the moment I'm a training psychologist starting up some research in MRI, and use a fair bit of neurophysiology from CT, fMRI, MEG, EEG etc in what I blog about, so feel free, and I will probably start rambling about XR more and more as I do my prelim reading, application and (fingers crossed) starting training so feel free but I can't promise relevance :)

Is it ok if I link to yours? I will definitely be reading them from now on

yes, I am a radiography student. I only have about 5 weeks left, though, and then I graduate. Exciting times, especially after 3 years!

I actually don't update that blog anymore. I'm using another one, instead. You can find it at http://ravenhurst.spaces.msn.com/

It's my all-purpose-about-me blog. Unfortunately, it's msn - so you may need to sign into msn in order to view it.

Oh boy! I can't wait for that! I can see how that would be very difficult without having any hands-on experience yet.

This girl I know is in her second year at the school I'm going to and she said everything she studied in the classroom really started to make sense once she started clinicals. So hang in there!