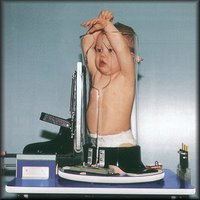 Well folks, meet the Pigg-o-stat. Also known by its more PC name, the Pediatric Immobilizer and Positioner. Although it looks like some kind of Medevil torture device, it's actually used to "immobilize" squirmy, wiggly little ones while we attempt to get a chest x-ray of them.

It's interesting to note the look on the kid's face in the pictures. I assure you they don't often look like that in real life. Most of the time they are screaming their little lungs out (which, consequently makes for a better chest x-ray) with snot running down their face. 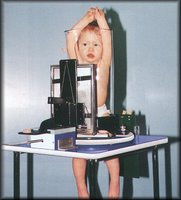 Luckily, the whole procedure takes about as much time as it takes you to tie your shoes, but that doesn't mean the first sight of the thing doesn't scare the hell out of the kid, or the parents for that matter. For obvious reasons it's only used as a last resort, after all attempts to manually immobilize the child have been exhausted. Also, the children it is used for are often so small/young, they wont remember the whole traumatic experience and soon after being liberated from the dreaded apparatus are back to happily sticking legos up their noses as toddlers have done for centuries.....well, decades anyway.

Usually, the parents are asked to don lead shield aprons and sit with the children for reassurance during the exam, but ultimately it rests on the radiographer to make the patient as comfortable and non-traumatized as possible. I am not looking forward to the first time I have to put an itty-bitty patient in one of these contraptions. Let the screaming commence.

My princess was born with a birth defect that required her to have xray after xray after xray. Her folder of xrays from birth to age 14 is several inches thick. (add two broken arms into the mix) I have had the good fortune, and misfortune, to work with xray techs who work with children. I know all about the screaming child and the cooperative child scenarios. I can only say that when the tech handles the situation w/out getting frustrated, without getting snotty - I notice and am appreciative. By the same token, when I sense that the tech has no investment in my child or is getting pissy, I get SO angry. I mean furious, protective, like a bear protecting her cub.

I'm glad to see that you are so aware of the different types of kids moods you'll be dealing with, I truly wish you patience, kindness, compassion as you move forward in your studies, knowing that someday a terrifed child will be in your hands. T.