The poke heard 'round the world.......or at least in my apartment 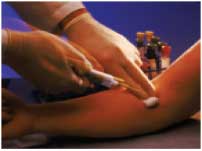 This weekend my wife was gracious enough to be my guinea pig for my very first attempt at venipuncture. What a doll!!

I had called her early last week, and requested that she permanently "borrow" a butterfly needle or two from work, so I could practice venipuncture on her over the weekend. She obliged and on Sunday night at approximately 5:32 pm I inserted a metal needle into a person's vein for the very first time.

It wasn't without problems though. As a nurse, she has had plenty of experience putting in IVs and the like, so she walked me through the steps involved and before I knew it, it was my turn to try. I did all the prep, applied the tourniquet, cleaned the area with alcohol, located the vein and then dove in. He shoots and........he misses! Damn! Just as I slide the tip of the needle under the skin the bugger of a vein decides to do a little shimmy to the left, my right! With some soft cursing and the draining of what little confidence I had, I withdraw the needle and take a breath.

"It's OK," she tells me, "That happens a lot, just try to hold the skin tighter with your other hand so the vein can't move around." Infinite patience, this woman has. So I reprep, pick a different vein in the same hand and gear up again for insertion.

Holding the skin tighter so the vein has no where to go, I slip the needle under the skin in as smooth a motion as I can. It feels the same as before and I am just about ready to begin with the soft curses again, when I feel a light "pop" and a flash of blood appears in the clear tubing attached to the needle. I'm in!! Success!! I ask her how she's doing and she says "fine", although her face looks a little whiter than normal. I secure the butterfly portion of the needle with some tape, like we have to do for the comp test, and sit back and admire my work.

"Great job," she tells me, "now can you take it out, I'm not feeling so good." I glance up at her and her face is completely ashen. I quickly get to work removing the tape and then the needle. I tell her to put her head down between her knees, of which she is already in the process. She is a nurse after all. I have the needle out and am holding the gauze tightly against her hand when she sits back up and I can see some color returning to her face. "It's a lot easier when you are on the other end of the needle," she says, "now I know how my patients feel."

She's a little embarrassed about getting woozy, so I try to distract her with all my stupid stories about passing out at the doctors office when I was 16 after getting my first Hepatitis shot, and about going completely white and scaring the phlebotomists the first COUPLE of times I gave plasma. Within a few minutes she looks and feels better and tells me that her hand doesn't even hurt where I put in the needle. I take this as good news and explain to her that it's probably because of my unmatched, inherent skill at doing IV injections. She doesn't buy this for a second, but lets me believe it at least for a while.

A few hours later she suggests I try it one more time before I head back to Phoenix, just to make sure I have the process down. Once again I do all the prep. I take her other hand this time and insert the needle and get flashback right away. Success again. This time she doesn't watch or talk during it and just lets me do it all myself. I think this helps, because this time she doesn't get woozy at all and says that she only felt a slight pinch right when I put in the needle, but after that no pain. I guess my practice is paying off.

What a sweetheart letting me practice venipuncture on her. However, she has already told me that when it comes time to test off on administering Barium enemas, I will have to find myself someone else to practice on. Can you blame her?
Posted by Dustin at 12:24 PM

pssst.. just a thought but perhaps flowers, a box of candy, a new silver bracelet.. a little special something might be in order here for wifely duties above and beyond. You've got a keeper thats for sure. T.

Yeah I really should think about doing something special for her. Although this weekend is her birthday so we already have some plans, but i will surprise her with something a couple weeks after her b-day, unexpected like. ;-)

OMG, I am laughing so hard at your emema comment! You wife is a doll for allowing you to practice on her. My hubby won't even let me practice shaving him, lol! Thanks for the laugh.
Eve

I'm thinking I should have practiced on my DH instead of just classmates. Would have been alot more fun! hehehe

After my IV class my partner and I looked like drug users for over a week (we both had bruises up and down our arms!!)

Your wife is an angel :o)