Well, it finally happened, a wildfire started in Flagstaff. Its called the Woody Fire and it started yesterday morning right next to I-40 about 2 miles west of Flagstaff, which is about 1 mile west of OUR apt!! I wasnt up there but I've been able to get a lot of info thru the news and from Becky.

As of last night it had burned a 1 mile stretch of ponderosa pine forest from I-40 up to West Route 66, and was expected to jump across 66 as it moved northeast. Several areas were evacuated by police and fire crews north of the fire including 3 trailer parks and the Lowell Observatory.

They blocked off Route 66 and with all the gawkers, traffic in town was in chaos. Becky took some pictures and video of the smoke as it rose up over the city. Here are some of the pictures she took. 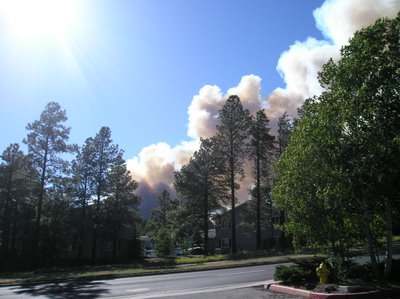 Smoke as seen from our apt parking lot. 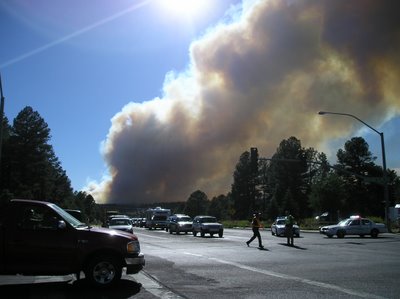 View from intersection of Woodlands Village Blvd and West Route 66 in Flagstaff, AZ 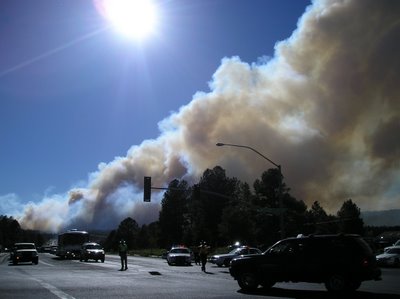 Same view as previous picture after smoke has moved. 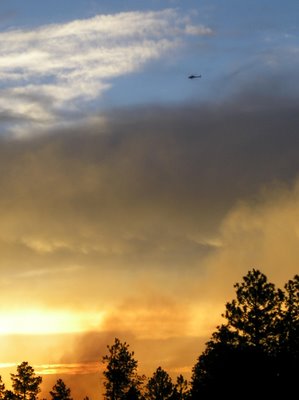 Helicopter works at dropping water on the fire as the sun begins to set. 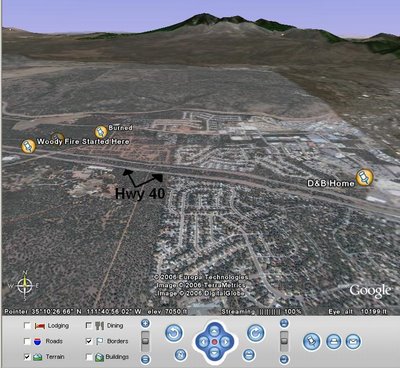 Map I made in Google Earth showing the location of the fire in relation to where our apt is
Unfortunately the weather is prime for starting and encouraging fires right now. Flagstaff has sustained winds of 25 mph and the humitity is around 5% with a dew point of 2 degress (i.e. VERY dry!) The temps are starting to rise too and are expected to hit 85 degrees today, which doesnt help any.

They called in fire crews from around the state in a hurried attempt to control and beat back the fire and keep it from moving toward town. The latest news says that the fire is progressing at a surprisingly slow pace for the conditions which has allowed the crews to keep it from crowning, which is when the fire moves from the forest floor into the tops of the trees. As you can see in the pics the smoke is a light, white color which means the fire is on the forest floor. when the smoke turns black it means that the trees are starting to burn, which usually leads to an increase in the speed of progression.

Its pretty scarey. We arent directly threatened at our apt, but it isnt too far off. fires like this can really take off fast and get out of control in a very short amount of time, especially in these conditions. Luckily Flagstaff had instituted the practice of forest thinning and deadfall removal in the forested areas in and around the city, which helps control or at least slow down the spread of fire. The states fire commissioner says that is a major reason the fire has not grown much in the last 24 hours.

I will try to keep up on whats happening up there, although its hard from Phoenix.

Thanks for the info; I have family in flag, so I thought I'd search eblogger to see if anyone had posted something about the fire! I appreciate the details! Any updates?