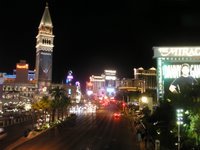 WOW, has it really been 2 weeks since my last post?! I guess its to be expected since, although I was on "vacation", I was super busy during the last couple weeks. We took a camping trip to Wet Beaver Creek (no kidding, that is the actual name, can you believe it?!) and then spent several days in Las Vegas, which was a blast. It was my first time there so there was lots to see. We stayed at the Stratosphere Hotel, which I highly recommend to anyone on a budget, and also saw a Cirque du Soleil show called "Zumanity". It was awesome!! A little risque though, which didnt bother me a bit! ;-) ha ha

Anyway, I thought I would post some of the comments I heard come from my fellow X-ray tech students during the last semester. The following are actual comments made by my classmates:

"The worlds population is now past 600 billion because of the lesbian couples who are being artificially inseminated."

"Buddhism has given me a wonderful basis for a career in radiography."

"I used to work with a Dr. Kevorkian. She changed her name. Guess why?"

"It's good that you should pee after sex to reduce your risk of a UTI. Most of my sexual encounters require a lot of drinking before hand anyway." said outside of class

"This is the Anteroposterior Missionary position."

"The CR (Central Ray) beam should shoot right up the crotch area."

"Who's gonna be the Enema Captain this semester."

"I respect your body parts."

The collective intelligence of the class isnt always at its highest, as you can see. With the coming semester I am sure there will be many more conversational gems uttered, so stay tuned for future class commentary.

Welcome back! Congrats on a semester well done! I'm still in mine, procrastinating, gradign to finish up and a final to administer this Friday before grades are posted on the weekend. Looking forward to it being done with for the summer!! T.

Hey Dustin! Glad to see you're back!

It sounds like you had a great time in Vegas. Next time I go back I want to check out Zumanity. I bet it was a good show.

I just got finished with my A&P final. I think I did quite well. I should know in a few days what I got in the class...actually I already know I got an A. I would've had to flunk the final just to get a B.

I want to hear more about your vacation...pretty please?! Is that nice enough :)

Loved the comments from class, several 'classics' in the bunch.